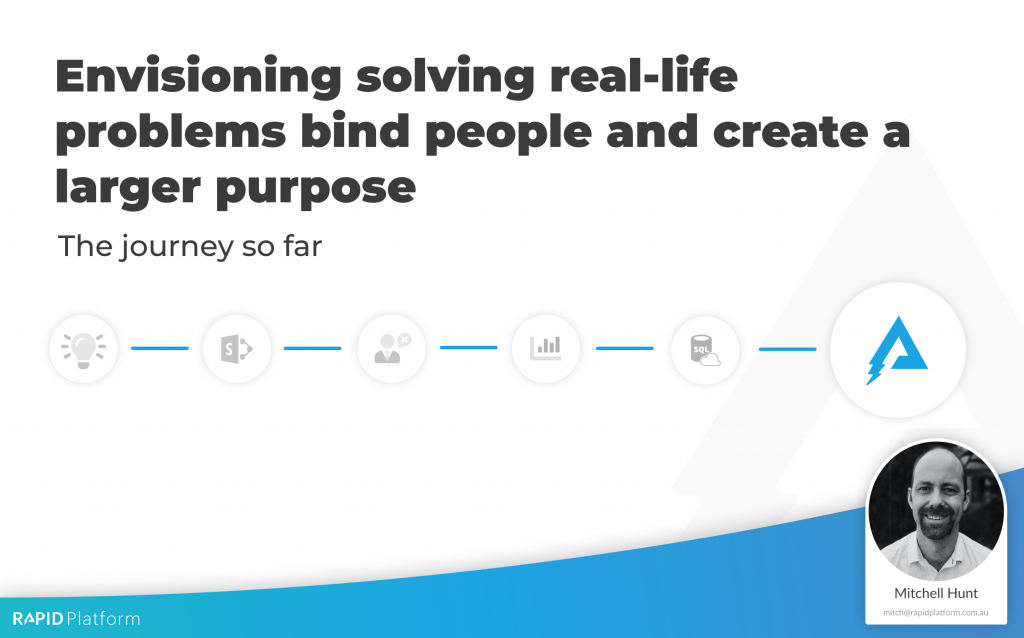 We are at the exciting and terrifying point in the journey. It is the start of 2019 and we are at the crossroads once again. The decision made here will have a long reaching effect on what the future will look like.

OPTION 1: We have something that works and can be taken to the market. It has the potential to generate great results for our customers.

OPTION 2: We take the learnings we have had over the last years and follow our newly focused dream but this would mean we start from scratch again for the 4th time.

What do we do?

We are in a pretty good position because we still have our core client and partner intact. I am still providing value to them doing their property developments. The system works well for that currently, but this is going to be a disruption for them as well. We have something that is working but it definitely isn’t complete with all of the features that we want. We would have to go a long way back before we could get back up to feature parity again.

From the tech team’s side of the equation, it isn’t even a question. Starting from scratch with all of the possibilities is a dream come true. All of those annoying things you just have to deal with because that’s how it’s been done could be up for a change. Therefore, I am struggling to get an objective opinion of what we should do for them.

In reality, it comes down to a conversation between me and Scott (partner/client). Funnily enough, it is a very pragmatic conversation.

The answers from those really end up in one direction. And there we go, starting from scratch again.

This time around though, we have Tyler. He knows exactly what he would do differently if he was doing it again from scratch. So I let him loose. At this stage, Tyler has been with us for about 2 years and even though he is still a key team member, it isn’t always smooth sailing. Tyler is VERY opinionated. He is also VERY good at what he does and so am I, so you can very well imagine the fireworks that could come from that 😉

There is some very heated discussions as part of this rebuild as I try to ensure that I understand what is going on. The technical level we are moving to is out of my league. Additionally, I bring my analytics understanding to the design (cause Tyler could not care less about analytics).

There has been quite a few times that our discussions have ended up with one of us cracking it (usually me) and throwing our hands up in the air in frustration. Although, every time I have ensured we get back on the same page. Ensuring that we are going in the right direction to our new goal is my role, and it doesn’t matter how hard it is because that is what I need to do.

So what do we need to do?

Also, we need to do a MVP in about 3 months because the funding doesn’t last forever.

It was hard for the small team then, only 2 programmers, as they built something unique. It was equally hard for me because for those 3 months, I was pretty useless other than asking how they were going, fetching them supplies, and testing (and breaking) the things they gave me.

To my surprise, in 3 months, they did it. MVP out the door and it hit the spot we wanted.

Was it perfect? Hell no

Was it feature parity? No again

Was it like chalk and cheese when you looked at the products next to each other? Yep, very much

We were pretty stoked with ourselves but this was just the beginning.

As part of my development role which I was still doing, I had to implement the new system within the business. I did the first part to replicate what we had in the old system and migrated the data across. I handed a login to Scott to have a look at and play with. He loved it, which wasn’t really a surprise because he had always been a huge supporter of what we had been doing.

Of course in true Scott fashion, there were a number of things that he wanted and most of them were great ideas. Out of that, 80% of it because of the way we built the system, we could do without a single line of code. To prove my point and give myself a big pat on the back, I made the changes while sitting with him in his office. He was pretty impressed and I was pretty chuffed with myself.

It works as expected!

And this is where in the story you would think that another roadblock would hit…. But actually, it was just the opposite.

To set the scene, Scott and us have shared an office since he became a partner. This is one of the great things that Scott brings to the partnership which has always been a huge help to us.

It has been a few weeks since I gave my demo and I hear the familiar ‘Hey Mitchy, can you come and help me’. To be honest, I usually roll my eyes when I hear this cause it can be ANYTHING; helping him print to .pdf, setup a headset on his computer, trying to install a new program mostly tech support stuff that I am good at but don’t really enjoy anymore.

I jump up and go into his office to find him with RAPID up on his screen. He is in the configure area ‘Designer’ and he has a question about how he can add additional data in the system. I am shocked, the same guy who asks me to help him with printing to .pdf is building his own system. It then dawns on me….

This is something special

Empowering users to build what THEY need. The only barrier to entry is a little bit of training and actually caring about the problem you are trying to solve. I grabbed Tyler and took him into the room so he could experience the actual outcome of what he has toiled over building. He is stoked. For the first time, he started to really get why what we are doing is so special.

Since then we have been on a journey to empower the non-technical users of the world. Enabling them to build what they need with little or no technical assistance. In some ways changing their opinion on technology as a facilitator not a blocker.

I am continually inspired by Scott (even though he still asks me or my team to help him setup his headsets and other tech support) that he has built a system for his farm, a system for his family. He continued to build out the system for his developments business and now he is using his knowledge to also help a construction company get themselves organised. He doesn’t do it because he has to or because he gets money out of it (cause he usually doesn’t) but because he honestly wants to help people. He has been given the tools and he wants to pass them on to others it can help.

These are the people we want to empower with RAPID; people within organisations who want to learn, people who want to contribute, people who want to smash obstacles out of the way and just get on with getting stuff done. We want to partner with them and provide them the support to make the difference that only they can.

COVID 19 has taught me that I can’t tell anyone exactly what the future looks like, but what I can tell you is that, at RAPID we have built something special with the sole intent of empowering others to be able to do more in their organisations. That’s what we want to be. Partners to our clients, to work towards organisational outcomes not just fulfilling contractual agreements. We want to continue to build the system not to meet our wants, but to line up with client and the RAPID community needs ensuring that wherever possible, we build it once for the benefit of all.

We have built that with a team of dedicated people who are committed to this purpose. I am so lucky to be finding new partners each month; team members, clients, and channel partners alike who resonate with what we are trying to do and want to be involved in doing it together with us.

I feel grateful to be able to wake up each day and work with the team that I do. I thank them for the passion and commitment that they have to drive this forward.

This is the RAPID journey so far. It has been full of ups and downs but we wouldn’t be where we are without it. I am excited for what the future holds for us and all our partners.

I would like to thank each and everyone who has been part of this journey with us, and contributed to the making of RAPID Platform directly and indirectly!

Read the series of the journey so far…

Mitchell is the CEO of Rapid Platform and Founder of Zapien Group. He is passionate about helping people and empowering individuals and organisations to achieve their full potential. Whether in the office or at home he is always energised by thought-provoking conversations. He loves to ponder and discuss some of the deep-seeded issues in today’s society. He enjoys reading and continually studies human and human behaviour; what drives us to do what we do, and how could we do it differently, better, and what would it ‘cost’ to change? His world is completed by his amazing and supportive wife and their remarkable, yet exhausting, four young children. Intentional parenting is a big part of his life and so you will frequently find him on the sidelines of a martial arts class, or with one of his children in the office. If you’d like to get a fresh perspective on a problem in your world, or you are crazy enough to think you can change the world, Mitchell would love to connect and have a conversation.