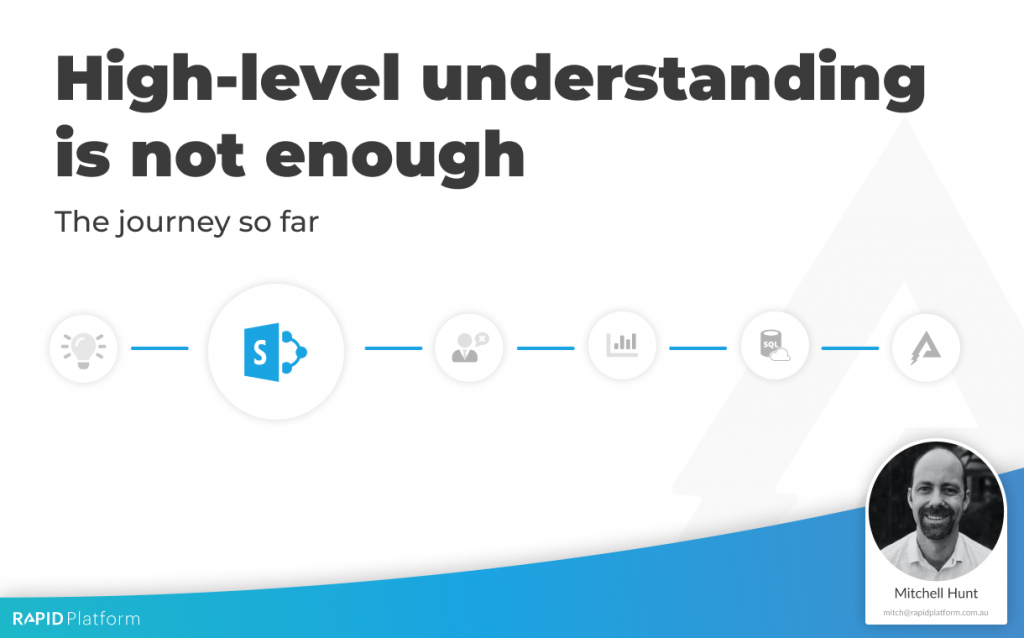 With all the overconfidence and bravado of someone in their mid-twenties, I jumped in with both feet. I stopped doing my successful property development business and went full time into my new found purpose.

I approached a construction business that I had worked for in the past in a technical role. I asked if I could work with them on developing a system to help them solve this problem of helping people know what to do and then actually get it done. To my surprise, they agreed and gave me an opportunity to do just that.

Needless to say, I had enough knowledge to be dangerous but blissfully unaware of how little I actually knew. At first, I began to experiment with Outlook Tasks mainly and got a head start with user buy-in. We were able to provide much more visibility than was available before (close to none). However, sooner than later we found out that the requirements found from using Outlook Tasks weren’t going to be able to scale to fit.

At the time Microsoft was testing a product called BPOS – Business Productivity Online Suite which went on to become Office 365 and now Microsoft 365. I saw the possibilities particularly of SharePoint to scale past the limitations associate with Outlook Tasks. This intrigued me. I went to work, spent hours learning about SharePoint and what it could do, and implementing those into a system that we could expand into.

With our Outlook Task experience, we had realised that even though Tasks are the key actions we need to track, Tasks don’t exist by themselves, they exist in the context of other information like Projects, Contacts, or Meetings. Therefore, we went down the path of adding that context to the system.

In theory, it could do everything that we wanted it to do. However, in practice, the level of control you had in the SharePoint administration space was not up to the user experience level that was required for the organisation. This had me move from the space of configuration into custom coding but I didn’t have the skills for it. I didn’t have a huge budget or a team at all.

Expectation Vs. The Reality

It was just me and what I could hustle to get done. So in my infinite wisdom, I thought you know what Outsourcing is the key. They have the skills, I have a little bit of budget, match made in heaven. I talked to a few companies, they all promised the world so I went with the one with the middle of the range price who promised transparency and expertise that I was looking for.

At the start, I was surprised by how well it all seemed to work. I would ask them to do something that they had expertise in that I couldn’t do and they would deliver it in a timely manner. This was great as we were making progress!!! But as time progressed the timelines started to slip and the limitations started to slip into the conversation.

And finally, the kick in the guts that really hit hard. We ran into a HARD limitation, the system that they had built (because of the way they had built it) could not scale to even meet the basic needs of the organisation.

We were not only dead in deep water but the reality of how out of my depth I was on display to everyone. I was humiliated and to be totally honest had I been a little older and a little less delusional, I may have actually given up then because this should have shown me that I was severely unprepared.

Everything inside me wanted to blame the outsourced developers. It felt as though they took me for a ride and didn’t provide me the expertise that I needed. However, on further reflection, I realised they had done EXACTLY what I had asked them to do. I had asked them to drive the bus on this particular route and then was shocked when the bus ended up in a fiery mess at the bottom of the cliff because I didn’t understand the topography of the area.

The problem wasn’t anyone’s except mine. I underestimated the problem and didn’t understand the technology I was working with. I outsourced the linking and understanding to someone else and this was my first important lesson of being a tech startup founder.

So where to from here?

Read the series of the journey so far…

Mitchell is the CEO of Rapid Platform and Founder of Zapien Group. He is passionate about helping people and empowering individuals and organisations to achieve their full potential. Whether in the office or at home he is always energised by thought-provoking conversations. He loves to ponder and discuss some of the deep-seeded issues in today’s society. He enjoys reading and continually studies human and human behaviour; what drives us to do what we do, and how could we do it differently, better, and what would it ‘cost’ to change? His world is completed by his amazing and supportive wife and their remarkable, yet exhausting, four young children. Intentional parenting is a big part of his life and so you will frequently find him on the sidelines of a martial arts class, or with one of his children in the office. If you’d like to get a fresh perspective on a problem in your world, or you are crazy enough to think you can change the world, Mitchell would love to connect and have a conversation.