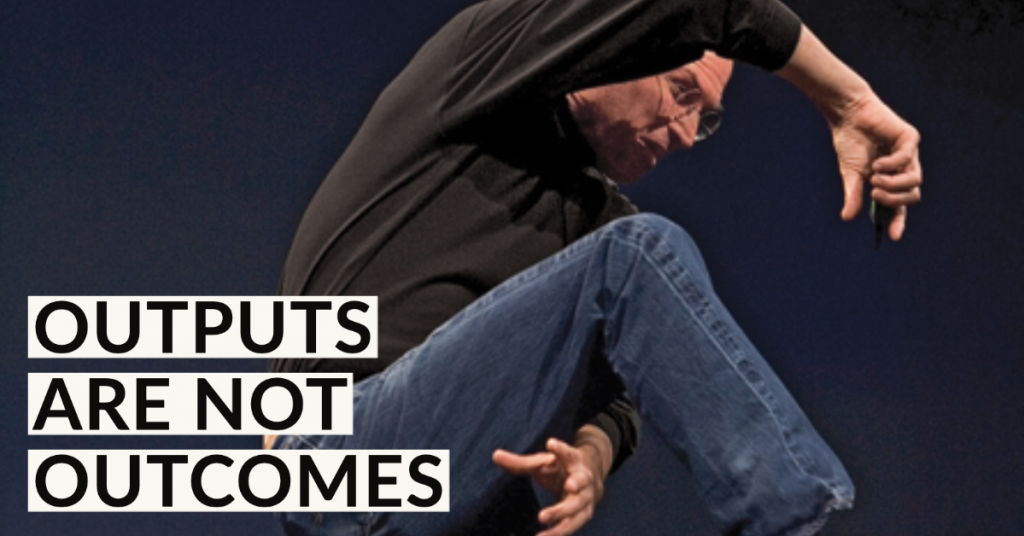 When Xerox’s PARC Labs engineers unveiled the first PC UI, mouse, keyboard and screen interface in the world, only Steve Jobs was leaping about with excitement.

– “Why aren’t you doing anything with this??!! This is the greatest thing! This is revolutionary!!!”

…he famously shouted, to the bemused engineers, unsure why someone would be so excited about their demo.

Steve Jobs contrary to lore, did not steal anything that day.

He did not invent anything either.

Steve Jobs though was an amazing innovator.

He did understand the difference between outputs and outcomes…

Here’s the crux of why, XEROX PARC Labs stumbled into a gigantic business success opportunity and managed to snatch defeat from the jaws of victory.

Here’s the crux of why Steve Jobs was not actually best at engineering or management, contrary to popular belief, but why he was peerless when it came to outcome visioning, real innovation.

To XEROX Labs, these processes were novelty things they got a computer to do. Gimmicky outputs, a few features allowing a user to do some things differently than the current solution. You can move the “cursor” like this here and “open” a menu “on screen”. But hey, we already know how to do this by running a simple command line, so you know. Yah. Interesting, cute outputs, so what?

To Steve Jobs this was a game-changing outcome for millions, revolutionising how we work, play, learn, interact. He saw immediately the millions who would be excited to work on a PC! Typing their own letters straight in soft copy! Entering IT careers headlong for many. Loving the practicality of a graphical UI. Entire families printing docs easily, from home. Playing video games, having fun (now that’s an outcome).

Efficiency vs. Effectiveness in SDLC

A lot of what we do in IT and software, goes to minimising outputs and optimising outcomes.

A lot of the True Agile goes to chiseling releases and work to deliver the best outcome and value. There is always too much to code, an old saying in SDLC that usually turns out right.

“There is always too much to code”

Coding by itself creates 0 value.

Coding efficiently can get you faster to that 0 value.

It is only coding the right thing that creates the value.

And it is vital to distinguish crisply between both if you are to deliver valuable projects. Otherwise you will get caught in the friction-laden, barren reeds of managing outputs only…

The outcome is people having fun, enjoying themselves enormously. And it works great because the Walkman output is perfect to deliver that outcome.

In fact, SONY engineers were given an outcome to engineer towards, not a set of specs or outputs. It came from their co-founder, who loved listening to music on business trips, but could not cart around the cassette player/recorder they offered then.

So he told them he wanted a device, that could play music and fit in the pocket of the average jeans/shirt.

Guided by this excruciatingly clear outcome, SONY engineers stripped all the outputs that did not contribute to just that. They replaced the speakers with a jack plug. They removed the recording capability. The vision was right. There was massive pent-up demand for mobile music listening. The whole engineering process had started around a sound outcome vision. The outputs were all secondary to that vision, and the result was a massive commercial success.

Well, we can revert to that fateful day at XEROX. What followed next was that XEROX released a PC called the XEROX Alto:

Failing to provide a coherent UX and to build on its amazing early technology, the model was under-powered and flopped commercially. That was the first and last of XEROX foraging into the PC market, despite a big headstart. And having proven pretty deft at engineering early prototypes.

What they engineered the Xerox Alto, they also showed a tenacious lack of understanding when it comes to delivering outcomes. Their first and last PC was not just underpowered, it was borne out of an organisation that failed to comprehend fully the ecosystem and user demands it now had to adapt to, having taken a late start:

The list goes on. Xerox also failed to market their product with a dedicated salesforce, failed to come up with a clear partnering strategy (allying with Olivetti instead of AT&T). They kyboshed the integration of TCP/IP into their networks. Their last-grasp attempt to save their software business was to join forces with IBM OS/2, another miscalculation.

Xerox survived and is now still a $10Bn company but could have been multiple times larger than this. The organisation at the time, that fateful 1979 day, was exhibiting all signs of a company that has been enjoying “rent” for too long, without clear direction anymore. Near unlimited budgets to finance R&D, but no understanding of industry trends and user outcomes. A company made of employees not entrepreneurs, too busy “milking the cash cow” for too long.

Jobs, on the other hand, understood coherent UX and user-outcome

Steve Jobs, on the same day, rushed out of PARC Labs, talked to his team, demanded they dropped everything. He wanted menus, he wanted windows.

He briefed Dean Hovey his lead engineer “Do a mouse! Do a mouse! We need a mouse!”

Did he steal the idea?

Not really it had been around for a while. PARC researchers got the idea for the mouse from Douglas Engelbart a Stanford Research Institute researcher.

Did he improve on it?

Completely. The PARC mouse was a $300 brick with a 2-week lifespan before breaking down. Steve Jobs wanted something “That costs $15, that lasts at least two years, and that can work on formica tables as well as jeans”.

(Observe the commonality between the SONY Walkman story and this one, they both had a very clear, life-based outcome to gun for, that it works on jeans, or that it fits in a pocket).

Did he facilitate adoption and market-fit?

Completely. As Dmitry Dragilev explains in his fabulous blog “Steve Jobs and XEROX the truth about Innovation”:

‘Xerox PARC’s innovation had been to replace the command line with onscreen icons. But when you clicked on an icon you got a pop-up menu: this was the intermediary between the user’s intention and the computer’s response. Jobs’ software team took the graphical interface a giant step further. It emphasized “direct manipulation.” If you wanted to make a window bigger, you just pulled on its corner and made it bigger; if you wanted to move a window across the screen, you just grabbed it and moved it.”

Here again, Jobs used his amazing vision to flesh out a much better UX and one that would innovate on what he had seen. Thereby also accelerating further the explosive growth of the nascent PC market, with such a better UX.

Innovators see a fit to market, improve, and engineer relationships that were not there yet.

The one key factor that separate XEROX PARC from Steve Jobs, the only one that can explain how Steve was so fantastically more successful despite coming late to the party, is that he did not think in terms of outputs but in terms of outcome.

His base mental unit was user satisfaction, not amount of lines of code.

Innovators take an invention and make it fit the market whether it exists yet or not. There was no market for “Walkmans” before SONY released it. But the user need was there, and they were guided by a sound, clear outcome.

XEROX had everything they could have ever wished to make their PC a colossal success. Near unlimited funding. Early access to technology. Existing working prototypes. Great engineers. And yet they failed spectacularly, for their management was unwilling to really prototype and test the market. They drank their own Cool-Aid around being copy experts, and always missed the much wider vision. They saw what they did as developing gizmo features, not providing value.

Jobs on the other hand saw into the future. Millions of happy PC users. Enormous savings in time or money from personal computing. That guided his product development. Must work on formica. Must last 2 years, for 15 bucks. PC must play music. Must be accessible by all.

As Jobs would later observe, a bit cruelly, if on point:

“If Xerox had known what it had and had taken advantage of its real opportunities, it could have been as big as I.B.M. plus Microsoft plus Xerox combined and the largest high-technology company in the world.”